In monolithic kernels such as Linux, much of the functionality is handled in kernel. However, there are OSes that push these functionalities to user space such as Barrelfish. Many conecept here will thus be borrowed from the Barrelfish OS. I will also borrow some materials from the main pdf from barrelfish course materials provided by Professor Simon Peter.

Microkernels like L4, Mach, Chorus, and Spring trapped page faults in the kernel but then reflected them up to other processes which carried out the actual page fault handling. This was done on a per-region basis, so each area of virtual memory was associated with some paging server. Memory objects could be shared between different processes and mapped differently in different address spaces. 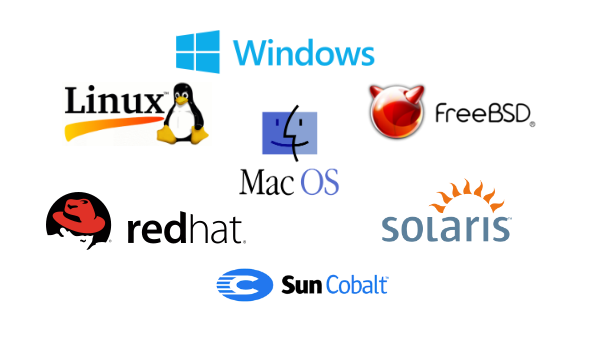 Such abstraction means that what happens when a page fault happens is entirely dependent on the code in the user-level pager. This design is highly extensible since it's all user code and thus isolated, which means that if a user-level pager crashes, there's a good chance the rest of the OS can continue quite happily since much of the functionality is moved away from the kernel.

However, moving functionality out of the kernel an important question: if user-space processes can manipulate virtual address spaces, how can we make sure that one user's program can't manipulate another's address space and memory? Here we will introduce the concept of capabilities.

Thus, we have two targets to emphasis: the subject and the object. The ACL(access control list) focuses on the object being operated on.

A good example will be whenever you enter ls -a in a Linux terminal, you will get list of entries specifies the attributes of a file. Here the attributes represent how a object (in this case, a file) may be accessed.

On the other hand, a capability can be thought of as a "key" or "licence". It is an unforgeable token which grants authority. Posession of a capability for an object gives the holder the right to perform certain operations on the object.

In partitioned capabilities, the kernel ensures that memory used to store capabilities is always separated from that used by user processes to store data and code, for example by using the MMU or ensuring that capability memory is only accessible in kernel mode. The OS maintains the list of capabilities each user principal holds (the clist), and explicitly validates access when performing any privileged operation. Thus, whenever the user accesses memory, the operation can only be done through the resources' corresponding capability. For example, one can map a page frame in the page table page through functions calls with only capabilities. 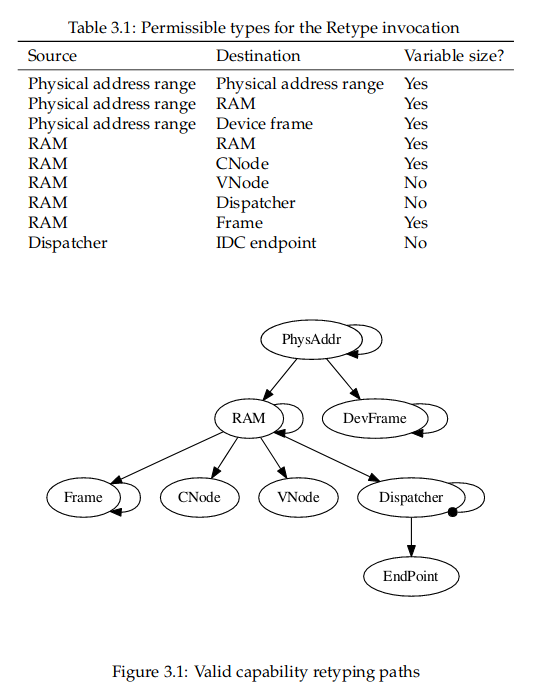 Capabilities referring to memory regions. Capabilites can also be split, resulting 2 new capabilities of the same type, one for each half of the region. Some of the more important capability types in Barrelfish are shown in figure below. The picture is from the Barrelfish manual provided in CS378 Mutlicore class by Simon Peter: 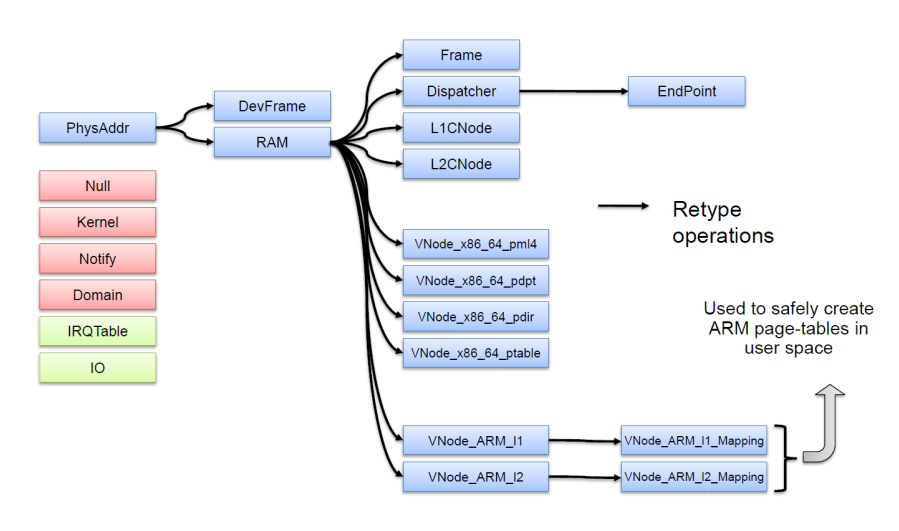 Allocation and management of physical memory is achieved by retyping and splitting operations on capabilities. For most kernels, the implementation is to constantly allocate and deallocate memory for a wide variety of purposes, much as any large C program relies heavily on malloc and free.

The problem is what the kernel should do when this runs out. The current solution in Linux is little more than "kill a random process and reclaim its memory", which can be a problem for system stability. In Barrelfish, all kernel objects are actually allocated by user programs. If a user process wants to create another process (or dispatcher in Barrelfish parlance), it has to get a capability to a DRAM area of the right size, retype this capability to type Dispatcher, and hand this to the kernel. This will be covered in later posts. To access different types of memory resources, the corresponding capabilty has to be retyped to the right type.

In Barrelfish, every capability resides in a slot in a CNode, so a pair (CNode, slot) would identify a capability. It is important to point out that the CNode is another capability itself. Each process in Barrelfish has a CSpace which is structured as a two-level table. So there are actually two different CNode capability types - one for the first level of the table, and one for the second. Every process has, within its "dispatcher control block", a pointer to the top-level or root CNode which the kernel can traverse.

A capability reference in Barrelfish is very similar to VA: the first few bits can represent an index into the first level L1CNode, while the next few bits refer to a slot in a CNode refered to by the capability in the L1CNode slot. Here is a picture from the main pdf showing how the the CSpace is represented in Barrelfish: 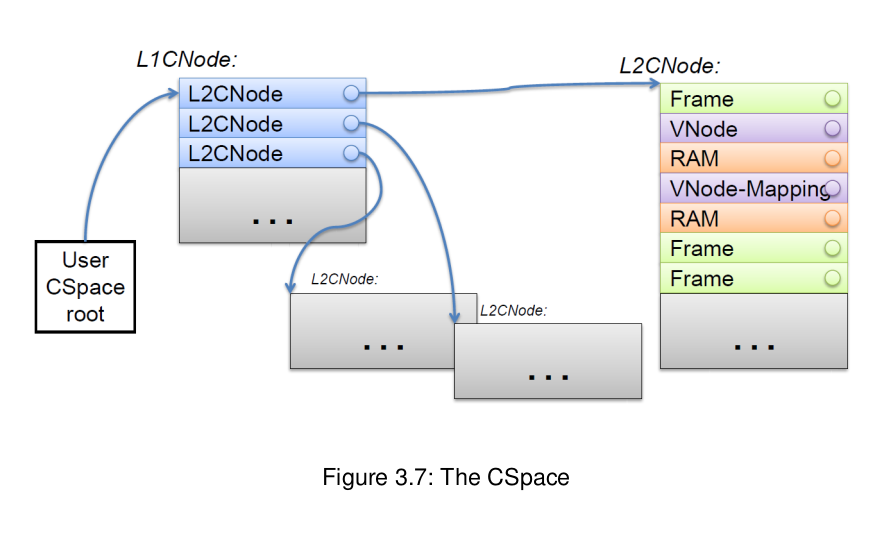 Even though it is pretty straight forward to understand the CSpace structure, the actual implementation is a lot more complicated than that. Since the CSpace is not directly accessible by user space program, there are additional data structures used to keep track of available memory resources.

In our implementation, the user process keeps a doubly linked list of struct mmnode to indicate the memory available for allocation. Each element in the free list tracks the information corresponding to one capability. However, there is a big problem with this seemingly simple implementation. Everytime we allocate a partical memory space from the memory region, a new capability is created while the old capability still remain in the physical memory pointing to a memory range before the allocation happens. Therefore, the old capability would cover extra memory spaces that are already allocated and managed by other capabilities.

To solve this problem, we maintain the allocation information in the struct mmnode each time an allocation occurs. If a capability covering physical address space from 0 to 100 is requested for 20 units of memory space, then the memory available for the next allocation would be from 20 to 100 even though the capability itself still manages 0 to 100. By restricting subsequent accesses only to the new memory range, the old capability can still be kept around and used later for retyping.

However, since capabilities can not be merged, an alternative choice would be to simple destroy it during free. However, this is even a bigger problem in Barrelfish.

Imagine the scenario where capability A is partially allocate from memory space 30 to 100. Later on another memory is freed and that piece of memory is managed by capability with base 100 and size 20, so the memory range covers 100 to 120, which indicates these the two capability could be "merged".

Our assumption here is that the parent or root capability is never destroyed when added to the free list. Whenever a capability needs to be freed, the memory manager is responsible to make sure the capability is only merged with another capability from the same parent capability.

This is done by creating another list of nodes that tracks all parent capabilities. It is only added when the memory manager adds new capabilities to the free list. After the user initializes free, the memory manager actually creates a new free struct mmnode first, then it find the node's parent node, copying the parent's capability and atrributes to the newly created node with updated offset to indicate that the memory hasn't been freed yet.

After that, the memory manager insert the node into the free list. If the memory manager finds out that there are capabilities adjacent to the just-added node, then we simply need to update the attributes of the corresponding mmnode to indicate that merging succeeds. The old mmnode is simply thrown away.

There is of couse more efficient solution than a linked list. For example, Linux uses both linked list and red-black tree to store thread information. The redundant data structures can be used in different scenarios when appropriate. However, we only use this simplified version to prove our concepts. Optimizations vary but the general concept still works pretty well.